Fantasy football aside – There are plenty of horror stories on the notorious cheapness of the Cincinnati Bengals but maybe… just maybe NFL media icon Ian Rapoport is correct in reporting how owner Mike Brown is looking to change the “narrative”.  The team has been active in free agency.  They have signed and resigned players such as D.J. Reader (DT), Trae Waynes (CB), A.J. Green (WR), Xavier Su’a-Filio (G), Mackensie Alexander (CB), Josh Bynes (LB) & Vonn Bell (S).  With all this activity, should they take Joe Burrow with the 1st overall pick will the team still have enough capital to supply him with a jock-strap?

Low-blow but could not help but recall a story told by T.J. Houshmandzadeh.  According to Houshmandzadeh, prior to his Bengals arrival former Bengals players Willie Anderson and Ki-Jana Carter purchased the team new jock-straps.  They did so because Management was only offering used equipment.  (Source – Behind The Steel Curtain)

At Least 4 Assets in Exchange for Joe Burrow 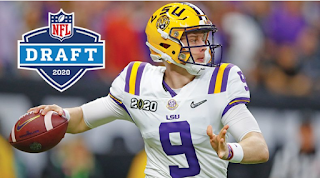 1 overall.  Should a team like the Miami Dolphins or Los Angeles Chargers wish to make a deal, they should be expected to give up 4 premium assets.   According to Guru Fantasy World – Since 2000, the overall No. 1 pick has been used on a QB 14 times.  On three of those occasions a team traded up in an effort to grab the #1 pick.  The price tag… 4 solid assets:

… if you want Joe, you better have some assets to spare!

Even with Sentiment of Joe Burrow Going at No. 1 OVER 3.5 Is A Top Pick

Even with over-willing sentiment of Joe Burrow being chosen as the 1st pick in the 2020 NFL draft, a top pick on StatementGames-Fantasy Football is that of OVER 3.5 QB’s being chosen in the 1st round.  StatementGames is running its FREE 2 Play Fantasy Football tournaments around the 202 draft.  In a random sample of 1,000  users who have played the OVER / UNDER 3.5 QB’s taken in the 1st round – 68% of the sample have chosen the OVER as one of their 10 selections.