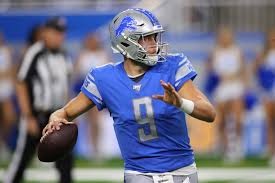 Both teams are desperate to snap three-game losing streaks.  They will meet Sunday afternoon in Detroit. The Lions were unable to pick up a win during a three-game gauntlet against Kansas City, Green Bay and Minnesota.  They lost these games by a total margin of 17 points.

“We’re always going to coach and work and try to improve and get better,” Lions coach Matt Patricia told reporters this week. “Certainly, that’s happened many times in the year’s past where teams have gotten better, as the season has gone on. We, obviously, have some work in front of us to do here and get that right. I certainly believe that’s what we can do.” Detroit has surrendered an average of 462.7 yards during its three-game slide and ranks 31st in the NFL in total defense (428.7 yards allowed per game), but it might get a respite in the form of the Giants, who have scored 45 points during their losing streak.

Running back Saquon Barkley totaled 72 rushing yards and a touchdown in his return from a high ankle sprain last week.  The team still lost 27-21 to the Arizona Cardinals. Rookie quarterback Daniel Jones was sacked eight times and lost two fumbles in the defeat while throwing his seventh interception in a four-game span.