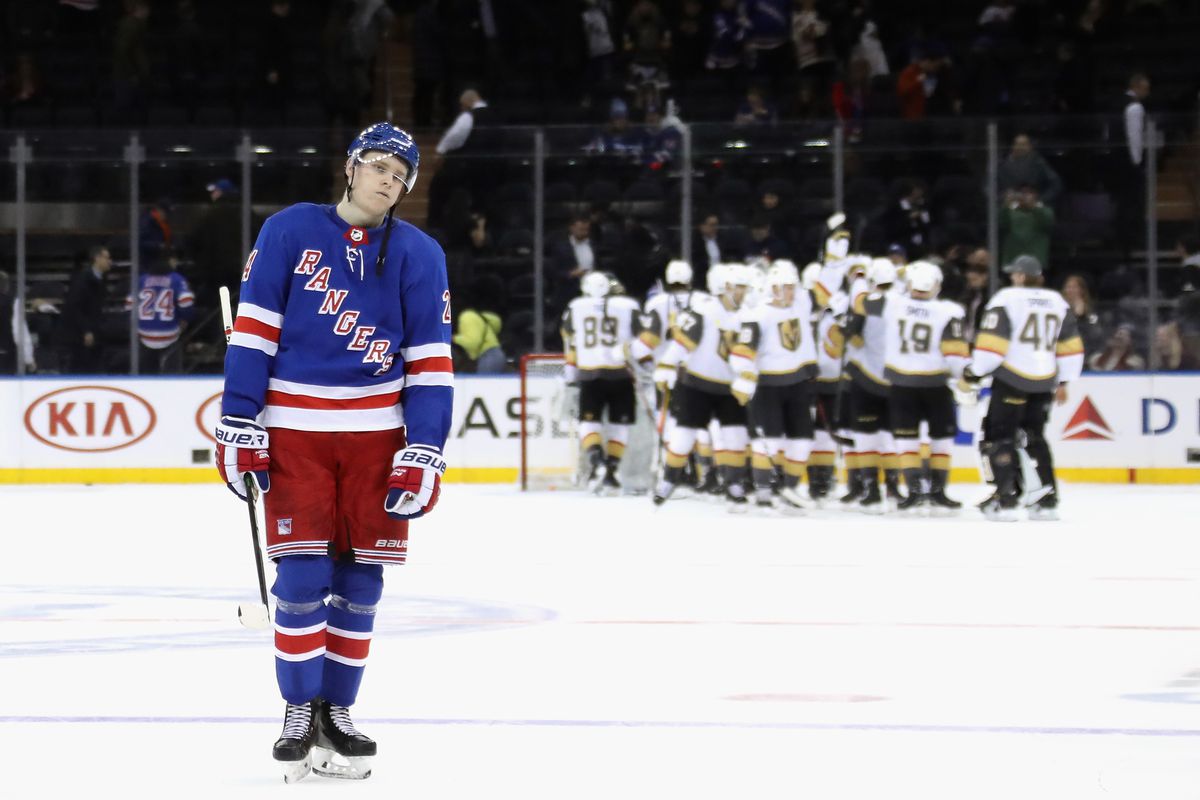 Both teams come into the contest off tough losses but with entirely different reactions afterward. Vegas capped its three-game road trip to the East Coast with a 3-2 overtime loss to the New York Islanders on Thursday, while the Rangers dropped a 2-1 decision to Montreal on Friday with Nate Thompson scoring the game-winner for the visiting Canadiens with just 1:07 remaining.

Vs the Canadiens, center Mika Zibanejad said “I thought we played more disciplined. I thought we played hard in our zone. We had a lot of zone time, didn’t really get to the good opportunities enough. It’s one of those bounces in the neutral zone, they go the other way and they score. It sucks that it’s just one minute left and we don’t get anything out of the game.”

“It’s tough,” added defenseman Marc Staal, who played for the first time after missing 13 games following ankle surgery to treat an infection. “It’s a funny game sometimes. We deserved better tonight, and it’s one of those things where we play again in a couple days. We just have to have a short memory and grow from it, learn from it, and move on.”

The contest was the second half of a back-to-back for both teams. The Rangers won 3-2 at Columbus on Thursday night despite getting outshot, 47-19, as goaltender Alexandar Georgiev finished with 45 saves and Artemi Panarin scored what proved to be the game-winner late in the second period.

Vegas, which also won 4-3 at New Jersey during its three-game trip, was a lot more upbeat following its loss to Islanders, which came on a Ryan Pulock power-play goal in overtime after Jonathan Marchessault had tied it for the Golden Knights with just 4:32 to go in regulation.

“It was a great game,” Vegas coach Gerard Gallant said. “Two teams battled real hard, there wasn’t much ice out there, and that’s the way the Islanders play. They’re one of the best defensive teams in the league. I loved the way our team played and competed. To get a point tonight was huge for us.”

The Golden Knights, in third place in a tightly bunched Pacific Division, picked up five of a possible six points on the trip and improved to 6-2-2 over the last 10 games.

“Even with this loss I still look at (the trip) as successful,” Tuch said. “We still got a point. We got five out of six on the road.”

“It was a real good road trip,” Gallant said. “If we keep playing like this, we’re going to win a lot of hockey games. I was really pleased with our group.”

1. In their 1st matchup the Rangers finished the contest with 23 giveaways, and the Knights’ forecheck was aggressive all night.

2. 72% of picks seen on StatementGames show participants favoring “Vegas Golden Knights Will WIN By OVER 1.5 Goals.”