All season, fans have said New England beat up on bad teams and shrank against quality competition. We’ll know more after the Pats play a home game against a quality opponent in the Kansas City Chiefs. As you read below – consider creating a FREE account on www.statementgames.com. 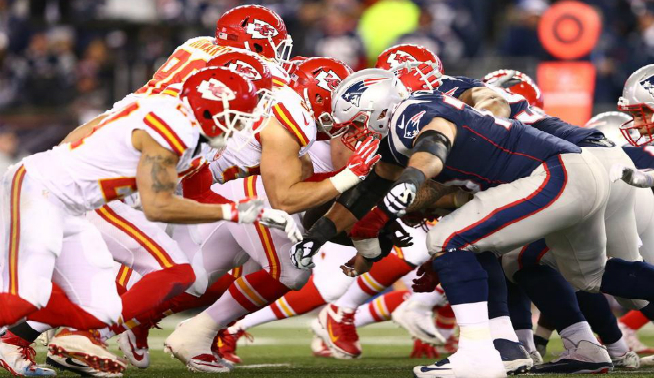 Coming out of the bye, Kansas City Chiefs faced an Oakland team intent on bumping them from the AFC West penthouse. Instead, the Chiefs delivered a blow that put them in the driver’s seat for the division crown. Kansas City led 7-0 after the opening quarter, 21-0 at the half and 31-0 after three quarters. The Chiefs kept the Raiders off the scoreboard until the first play of the fourth quarter and out of the end zone until only 39 seconds remained in the contest. Kansas City was outgained 332-259 and lost the time of possession 31:41 to 28:19 in the contest. The Chiefs held a 22-19 edge in first downs and forced three turnovers while not committing one in the game. Kansas City added a defensive two-point conversion on a blocked extra point return.  This sets the stage for a match up with New England.

The Patriots recently suffered their first loss of the season with a road loss (37-20) to Baltimore before rebounding with a 17-10 road win over Philadelphia and a 13-9 home win over Dallas. That set the stage for their Sunday night game against the Texans.

Against Houston, New England couldn’t get their offensive attack going with any regularity when the game was hanging in the balance. The Patriots scored on their opening drive of the game to take a 3-0 lead but they struggled to do much over the first three quarters. New England was in a 21-3 hole late in the third quarter before scoring their first touchdown with 12 seconds to play in the stanza. After giving up a touchdown to trail 28-9 with under 10 minutes to play, the Patriots finally got going but it was against a soft prevent defense by the Texans. New England scored two touchdowns in the final 3:42 but ended up falling short. The Patriots rolled up a 448-276 edge in total offense, 29 first downs to Houston’s 16 and controlled the clock by a 34:35 to 25:25 margin yet none of it mattered. New England did commit the game’s lone turnover and couldn’t get things going until things were out of reach. The loss, coupled with Baltimore’s win, pushed the Patriots out of the top spot in the AFC playoff picture.

1. While the Patriots have forced 29 turnovers, the second-most in the league, the Chiefs have only turned the ball over 11 times all year, the fourth-fewest in the league.

2. If the Patriots win, it will be their 22nd straight at Gillette Stadium (including playoffs), which would set a new franchise record and third-longest in NFL history.

3. Starting quarterbacks under the age of 25 are 0-41 against the Patriots at Gillette Stadium since 2001 in the regular season. Mahomes is 24 years old.