One of our favorite Islanders to watch was Lubomir Visnovsky. When the Isles acquired Lubo, he didn’t want to come here. He threatened to retire. After playing out his contract as an Islander, sharing a power play with John Tavares, Lubo signed on for 2 more years at over $9 million dollars. Injuries kept Visnovsky from living up to that contract.  However, playing  with John Tavares made Visnovsky over $9 million extra dollars.  We do not believe he would not have gotten that by retiring from the NHL.

2010-11 James Wisnewski (Wiz), was acquired be the New York Islanders to be their main offensive defenseman.  By playing with Tavares, Wiz began by far greatest offensive season of his entire career.  We feel Islanders GM Garth Snow saw the impact John Tavares would have on Wiz and he made a decision. Does an awful Islanders team spend resources on a guy that is flourishing in his offensive role?  Or should the team trade that guy for something as awesome as a 2nd round pick?  James Wiz was dealt after only playing in 32 games for the Islanders.  Anyone who goes after Sean Avery should have been given the right to finish the season.

Wiz was traded to Montreal. In Montreal, Wiz kept up that offensive pace. 21 points in 32 games as an Islander, 30 points in 43 games in Montreal. 51 points in 75 games on the year as the Wiz helped push Montreal into the playoffs.

And for that amazing offensive season? The John Tavares economy kicked in- 6 years, $33 million. Did Wiz ever exceed that year that he encountered John Tavares? Nope.  Wiz didn’t even see the end of that contract. He was traded twice and bought out, the buyout ending this past April.

Others Affected By John Tavares

Players who Tavares smiled upon that led to some interesting deals. Ryan Strome trained with Tavares in the offseason. That’s worth $2.5 million a year for 2 years. Cal Clutterbuck played with Tavares as a kid. That’s worth initially doubling his salary for 3 years, then adding another half a decade to his contract for a total of $28.5 million.  Friend Jordan Eberle brought his $6 million deal to town..lets see if that gets extended in upcoming days.

It’s time to think that JT should be the first ever active player/agent. If he took 10% of what he gets other people, he’d greatly enhance his career earnings. Bailey alone would be ponying up $4 million alone.

We’ll all be watching the Tavares drama unfold this NHL offseason!  Here’s some predictions- come October, Dough Weight is head coach. Garth Snow is GM. And John Tavares is a richer man, but not playing for more of the same. 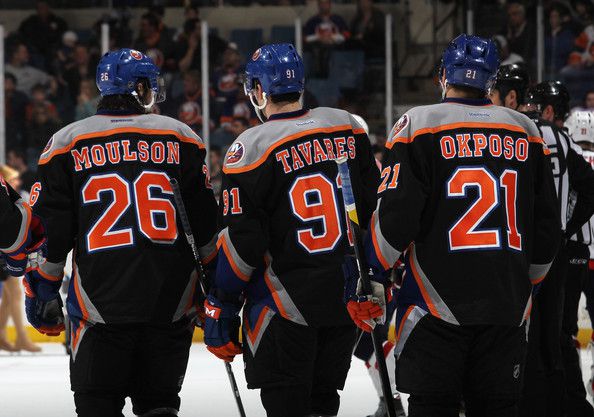